Get excited for this month’s challenge with a poignant and funny reminder from author Chuck Wendig that writing is so much more than “just writing.”

The good news, and the bad news, is that there is nothing I can tell you that

You already know it’s going to be hard. Writing, despite what some assume, isn’t easy. It’s an act of mining – except instead of chipping rock, you’re chipping away at ideas, at emotions, at the schist and bedrock of your own mind.

You already know that it’s going to be weird. I mean, c’mon. You sit in front of a computer, basking in the glow, and you look at that glowing square and try to impress upon it the breadth and depth of a whole story. You also make people up. Like, you invent them. Wholecloth. Thin air. Entire beings that are you, but aren’t you, at the same time.

You already know that nobody will really appreciate it. I’m a NYT-bestselling author, and I still meet people who know I’m a writer, and their response is basically, “That’s nice.” And then they tell you a thing as if it’s somehow equivalent: “Oh, I found a sale today on a nice jacket,” and you want to respond, “I CREATED A WHOLE UNIVERSE WITH MY MIND, IT ISN’T THE SAME, JANICE,” but they just blink and smile and you can’t really crack that nut.

You already know that to write, you need to write. You need to quantum entangle YOUR BUTT with THAT CHAIR and herd those words. Writing can’t happen without writing, can it?

You also already know that writing isn’t just writing. It’s also a whoooooole lot of wandering and dreaming and thinking and worrying. It’s showering and mowing the lawn and then reading and re-reading and editing and weeping and eating cake under your desk.

You already know that desk-cake is the best cake, but also the most worrisome cake.

I can’t tell you anything you don’t already know.

But you and I both know, too, that no matter how weird and how hard it is, writing is what you do and who you are, and it’s worth doing just the same. Stories are sublime. Books are amazing. You don’t come to this ignorant of that. It forms part of a fantastic tradition – a tapestry of words and tales to which you wish to add your very own thread. You know that it matters. That being this thing and doing this work is important to you. Because you’ve read so much already by so many others that has left an indelible print on your soul.

You know you’re going to do it.

You’re a writer, and a writer writes. You know that, too. In your heart. In your gut.

So go write. Show us all what you know.

See you on the other side, penmonkeys. 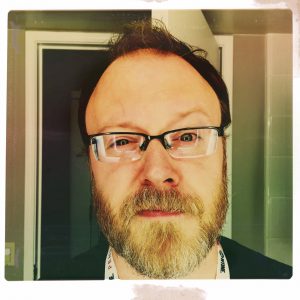 Chuck Wendig is the New York Times bestselling author of Star Wars: Aftermath, as well as the Miriam Black thrillers, the Atlanta Burns books, Zer0es/Invasive, and his upcoming epic, Wanderers (Del Rey, 2019). He’s also worked in a variety of other formats, including comics, games, film, and television. A finalist for the John W. Campbell Award for Best New Writer and the cowriter of the Emmy-nominated digital narrative Collapsus, he is also known for his popular blog, terribleminds.com, and his books about writing. He lives in Pennsylvania with his family.

Social Media: @chuckwendig on Twitter and @chuck_wendig on IG